Welsh Chambers and Businesses come together to restore local ferry 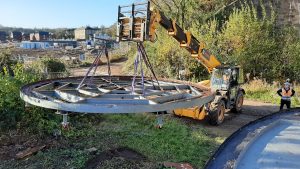 After 55 years, the iconic turntable from the Severn Princess Ferry was put back on board and was spinning again.

The whole operation was filmed by ITV for a forthcoming programme called Vanished Wales.

A fleet of ferries – the Severn Princess, King and Queen were used to ferry vehicles and passengers across the Severn between Aust and Beachley until the Severn Bridge was completed in 1966.

The idea of the “turn-table” was developed to make vehicles more manoeuvrable on board the deck of the ferry and came to Ida the wife of owner, Enoch Williams one night in a dream, which took her back to 1897, when her late grandfather, had been an engine driver and had shown her “engines revolving on a turn-table.”

The turntable on the Severn Princess has a diameter of 18” 0’ (5.5 metres) and weighs exactly one ton. In the day, cars weighed approximately 1/2 ton each, all pulled around on the turntable by one man with a rope. 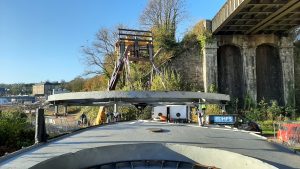 The Severn Princess served from 1959 until Sept 8th 1966. During this time, the turntable manoeuvred over half a million vehicles within its seven-year tenure, until the Severn Bridge opened and the ferry service stopped.

When the Princess was subsequently sold on to an Irish firm, they concreted the wheels and put kinks in the running rail, as they did not want the turntable to move. Now, with the ferry firmly back home in Chepstow, the turntable is back on board and moving again!

The Severn Princess Preservation Trust is now a charity. Sue Kingdom, Trustee and Secretary of Chepstow Chamber of Commerce said, “What an incredible day! Without the close collaboration of the Chepstow Chamber and Chambers Wales South East, South West and Mid, bringing together businesses such as Hackwood Fabrication Solutions, Taylormade Energy Solutions and Barratts, along with our hardworking volunteers, we’d never have got this far. We can’t thank them all enough. It’s been an incredible team effort, it really has – and all captured on film!”