“The Partnership and Engagement Programme with the University of South Wales (USW) has allowed us to achieve what we were beginning to suspect as impossible. Not only did we receive a solution to our problem, but also a great deal of sheer relief.” Rhys Thomas, Head Craftsman, Tarian Drums.

With a background as a professional musician and having grown up in workshops with two grandads who were skilled master carpenters, Rhys Thomas always dreamed of making his own drumkit.

Rhys studied music, and spent 10 years working in theatres, playing for artists, and locally teaching drumming in south Wales. When he started a family of his own, priorities took a natural shift, and he no longer had time to dedicate to performing.

Determined to continue to make money from music, he turned his passion from playing drums, into making them. 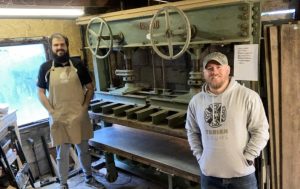 “It started as a hobby,’ said Rhys, “I just thought I’d give it a go, so I made one drum and it turned out pretty well. A friend asked if he could paint it, and it looked amazing, so together we thought we’d go for it. Over six months we took all the necessary steps to get a business going – brainstormed a name, completed all the legal documents – it was exciting. We gave our creations to a few drummers and the feedback was extremely positive. People started requesting them – we had a real demand – but this was when we realised we had a big problem.”

To make a drum shell perfectly round, a mould is required to ensure the body doesn’t become warped and affect the sound. Rhys had been using a wooden mould, which had been working well until the demand on his creations increased.

The wooden mould would perish after making 10 drums, and took a day to make. Rhys went on to explore the possibility of using a steel mould, but it was expensive and unreliable in quality.

Rhys approached USW Exchange, the front door for business engagement at the University of South Wales, with his problem.

“We felt like we were facing an uphill battle, and we weren’t winning at all,” said Rhys, “We spoke to the team at USW Exchange, and they suggested we go through the Partnership and Engagement Programme. This provided us with funding for academics in the engineering department to explore our ‘mould’ problem and try to find a solution. 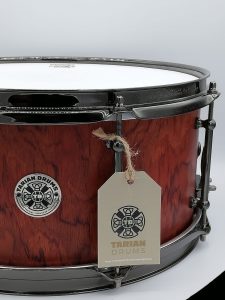 “It was a no brainer – it had been costing us a lot to experiment, and now there was an opportunity to for skilled engineers to experiment with the assurance of the grant from the programme. We met with the head of the engineering department, who suggested 3D printing the mould. They created a prototype for us, and it was perfect. So far we have made 20 drums and there has been no deterioration at all – we suspect it will go into the 100s, if not 1000s.

“We spent three or four years in pursuit of this mould, the Partnership and Engagement Programme allowed us to achieve what we were beginning to suspect as impossible. We are now looking to secure finance to have 15 moulds created in this way. It has revolutionised our business, and we couldn’t be more grateful.”

Tarian Drums are the only drum manufacturers in Wales to make their own shells. From dreaming of making his own drumkit as a child, Rhys is now on track to providing high quality drum kits to performers and influencers all over the country.

The Partnership and Engagement Programme provides funded scoping and feasibility support from University of South Wales’ experts. If your business could benefit from funded support, get in touch with us by calling 01443 482266 or email uswexchange@southwales.ac.uk.