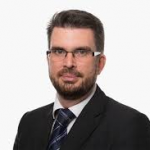 And they said that further modest rises in Bank Rate were likely over the coming months.

Inflation is currently at 5.4%.

The sharp rise in energy prices over the past year is one of the main reasons for this.

The price of oil has almost doubled over the past year, and the price of gas is almost five times higher than it was a year ago, bringing higher petrol prices and bigger electricity bills for households, and higher costs for businesses, in Wales and the rest of the UK.

These effects are likely to continue pushing costs prices up in the coming months, especially when the energy price cap is raised in April.

Higher prices for goods that we buy from abroad have also played a big role in the rise in inflation.

Across the world, the pandemic has meant people have been spending more on goods compared with services than they would usually.

On top of that, because of shortages of materials, some businesses have struggled to supply certain goods.

For example, I’ve heard from contacts at local car dealerships here in Wales that shortages of computer chips have caused the waiting lists for new cars to lengthen a lot. As a result, the price of the second-hand cars that they can supply have risen.

While much of the rise in UK inflation has come from higher energy and goods prices, some upward pressure on businesses’ costs has also been coming from within the UK jobs market.

The number of people out of work is going down, and the unemployment rate is now only slightly higher than it was before the start of the pandemic.

Businesses are coming under a lot of pressure to pay more to get and keep staff.

My contacts at businesses across a range of sectors such as hospitality, care, IT and automotive manufacturing have been reporting particular difficulties in getting enough staff.

A recent survey of Agents’ contacts across the UK showed that businesses expect to increase pay by almost 5%, on average, this year.

This growing evidence of inflationary pressures in the UK economy is why the MPC has decided to raise Bank Rate.

In the latest Monetary Policy Report, the MPC’s forecast put inflation at just over 7% in the spring, then starting to fall back towards our 2% target.

Inflation is expected to be close to 2% in around two years’ time.

Energy prices are not expected to continue to rise as fast as they have, and the supply shortages currently causing difficulties for businesses are expected to ease.

The pandemic hit the UK economy hard, but it has recovered well.

In November last year, the level of economic activity was back to where it was just before the pandemic.

Omicron has since caused activity to fall, as people went out less and spent less, but the impact looks to have been quite limited.

With the recovery well underway, the economy doesn’t need as much support, so Bank Rate can be raised.

By doing so, the MPC is taking action to ensure inflation returns to target, which will support people’s jobs and incomes over the coming years.