The British Chambers of Commerce’s Quarterly Economic Survey – now in its thirtieth year as the largest UK private sector survey of business sentiment and a leading indicator of UK GDP growth – found that UK economic conditions weakened in the third quarter amid a significant deterioration in manufacturing sector activity.

·         The balance of manufacturers reporting increased export orders lowest in a decade and domestic sales lowest since 2011.

The latest results of the survey of 6,600 UK firms that employ roughly 1.2 million people, point to an economy sagging under the weight of relentless uncertainty, another looming Brexit deadline, and deteriorating global economic conditions amid heightened trade tensions.

In the manufacturing sector, there was a marked downward shift in many indicators in the third quarter. The balance of firms reporting increased domestic sales was at its weakest since Q4 2011 and domestic orders entered negative territory for the first time in seven years – indicating more businesses saw a decrease than increase. The balance of firms reporting increased export sales dropped to its lowest level since Q4 2015 and the balance for export orders went negative and stood at its lowest level since Q3 2009.

The balance of firms in the manufacturing sector that increased investment in training dipped to its lowest level since Q1 2010. Indicators for business confidence in turnover and profitability among manufacturers dropped to an eight-year low. 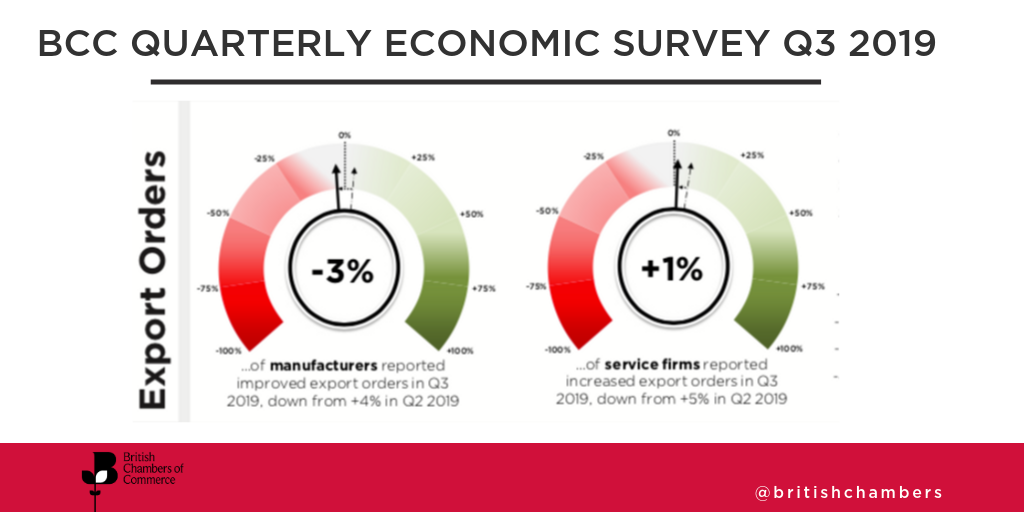 Manufacturers reported that their cashflow position – a key indicator of the financial health of a business – has deteriorated. In the services sector, cashflow held steady, but remains low by historical standards.

Responding to the alarming findings, the BCC is imploring Westminster to take urgent action. In the coming weeks, both government and parliament must do everything in their power to avoid a messy and disorderly Brexit, while at the same time taking bold action to incentivise investment and to cut the high up-front cost of doing business in the UK. In an unwanted no-deal scenario, additional targeted measures will need to be taken by government to support businesses through unprecedented times of turbulence and change. 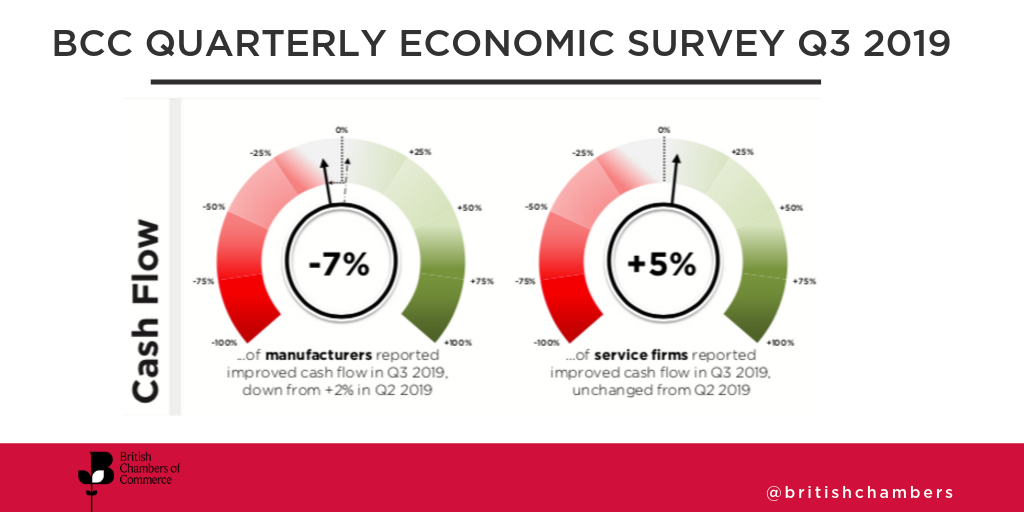 Suren Thiru, Head of Economics at the British Chambers of Commerce (BCC), said:

“Our findings point to a worrying drop-off in UK economic activity, with unrelenting uncertainty over Brexit and a notable slowing in global growth prospects dragging down almost all the key indicators in the quarter.

“The manufacturing sector continues to toil under the weight of diminishing cashflow, weakening global demand and disrupted supply chains, and the data indicates that the sector was a drag on UK GDP growth in the quarter. Although the slowdown in a number of the key service sector indicators was relatively modest, slowing activity in the sector is a concern given its dominant share of overall UK economic output. A stuttering services sector coupled with a worrying downturn in manufacturing activity indicates that any bounce back in UK GDP growth from the contraction in the second quarter is likely to be underwhelming at best.

“Looking forward, weakening orders, confidence and investment intentions suggest that unless action is taken the UK’s current weak growth trajectory could drift markedly lower over the near term.” 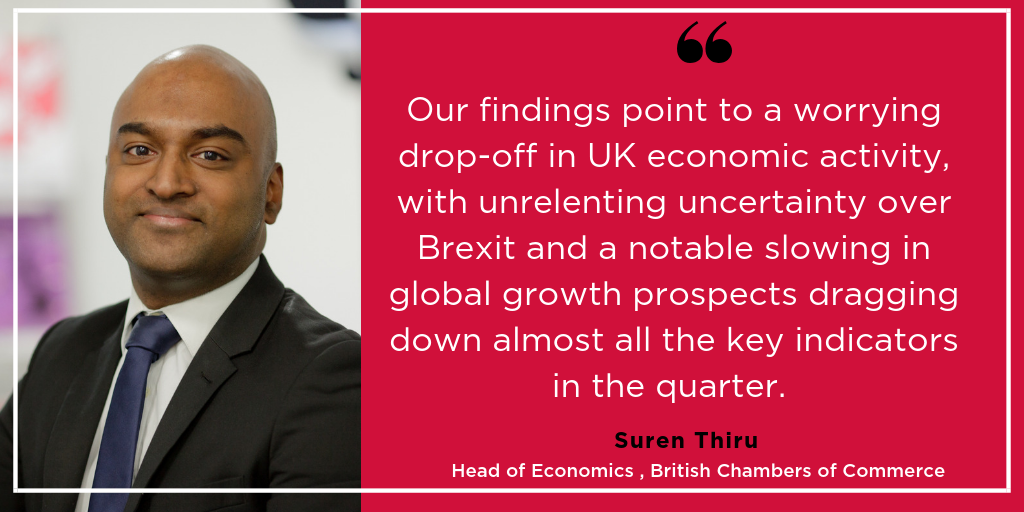 Reacting to the results, Dr Adam Marshall, Director General of the British Chambers of Commerce, said:

“This is a reality check, not scaremongering or politicking. These are some of the worst figures we’ve seen in a decade – and jobs, businesses, and the future success of our communities are on the line.

“Behind each and every one of these statistics sit thousands of real businesses, who are feeling the cold harsh winds of Brexit uncertainty and global trade turbulence right now.

“We need to see immediate action to avoid a messy and disorderly Brexit on October 31st, alongside bold measures to stimulate investment and confidence across the UK. The government must also make urgent preparations to support business cashflow, where the strains of acute uncertainty are hitting businesses, and particularly manufacturers, hard.” 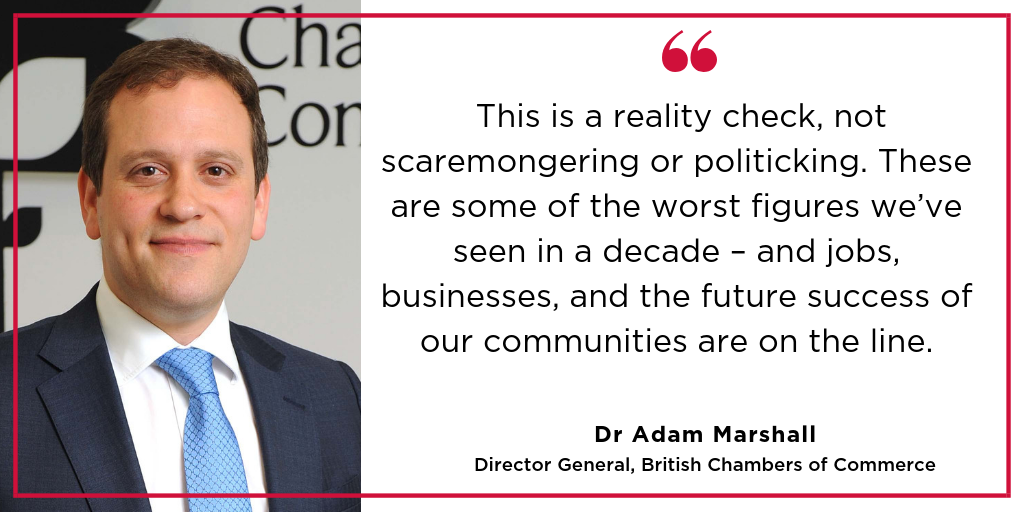 ·         The balance of firms increasing investment in plant/machinery fell in the quarter from +11 to +7 remaining historically weak, and investment in training fell from +14 to +8, lowest since Q1 2010.

·         The balance of firms reporting improved export sales remained steady at +6. Those reporting increased export orders fell from +5 to +1.

·         The balance of firms reporting improved cashflow held steady at +5, but remains weak by historic standards.

·         The balance of firms looking to increase investment in plant and machinery held at +5 and fell slightly from +14 to +13 in training.

·         The balance of firms confident that turnover and profitability will improve over the next year decreased from +35 to +30 for turnover from +26 to +20 for profitability. 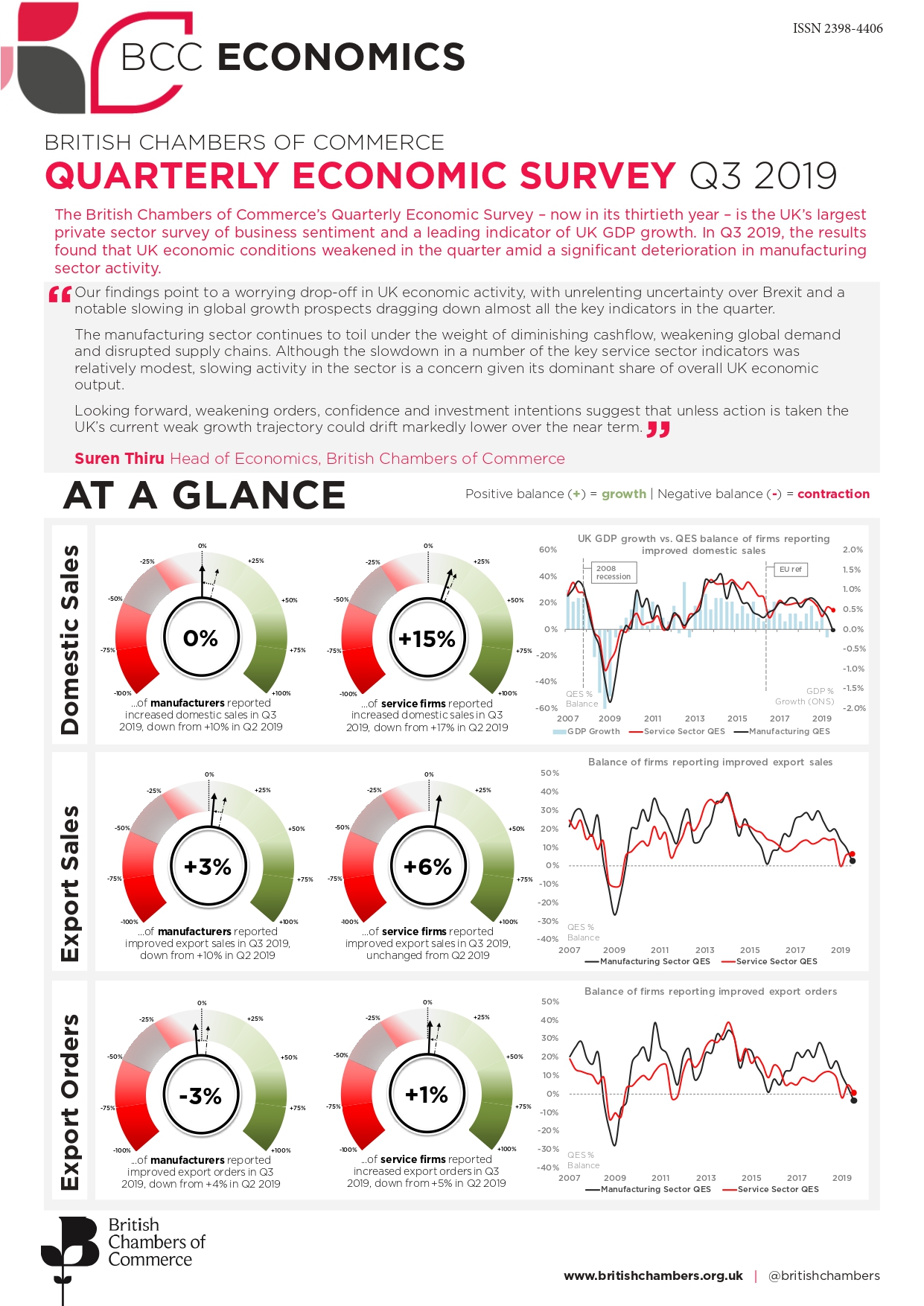 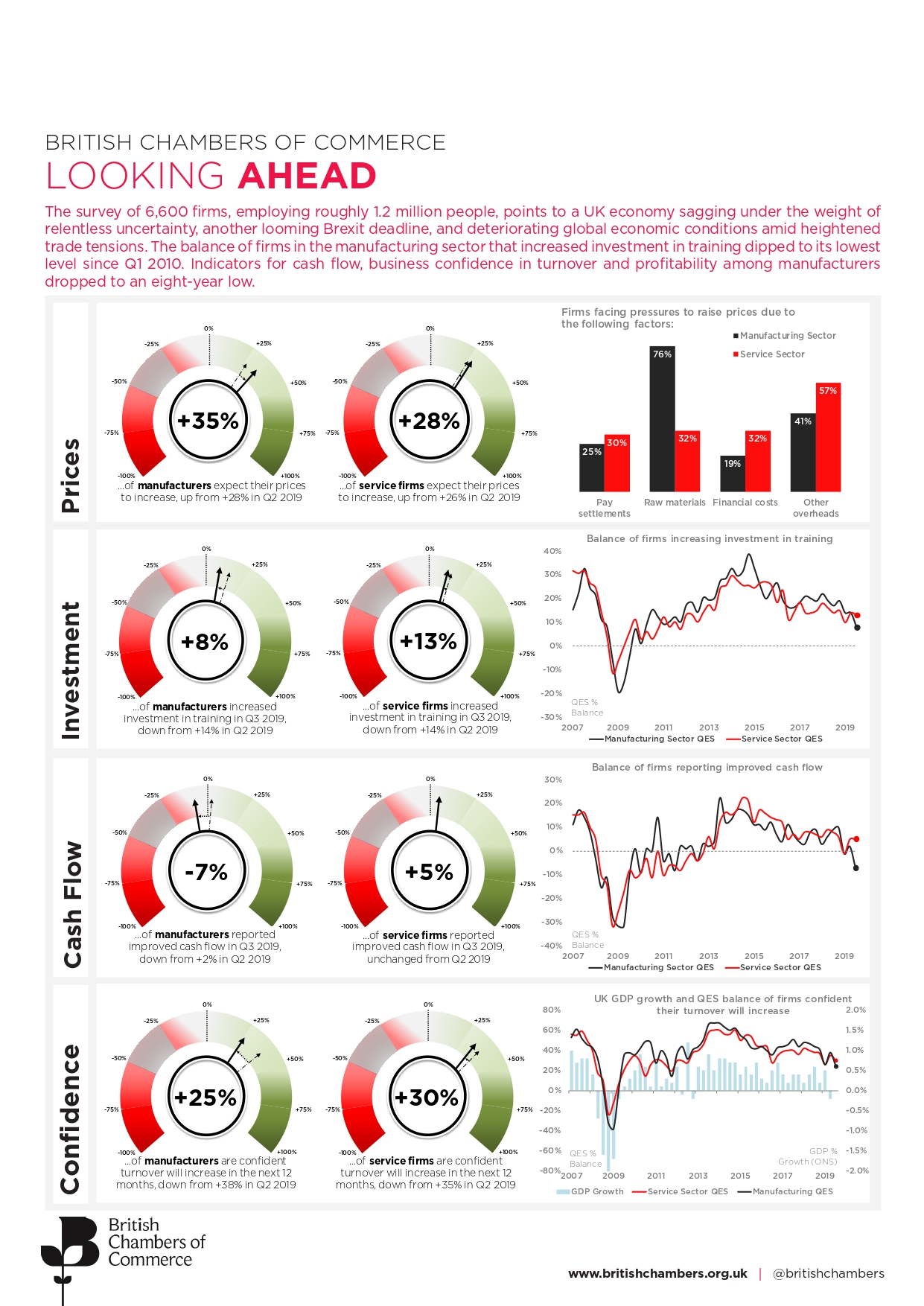 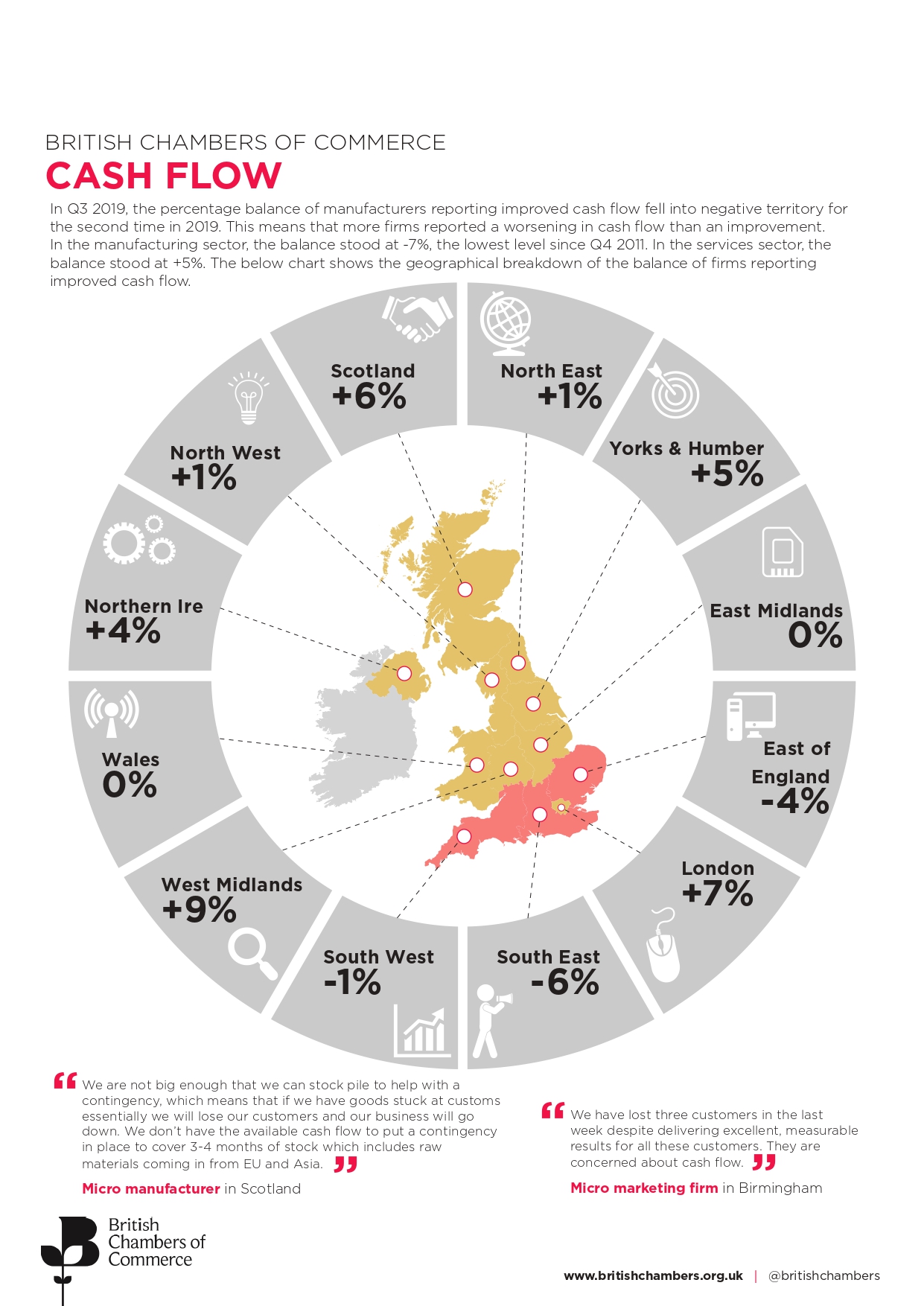 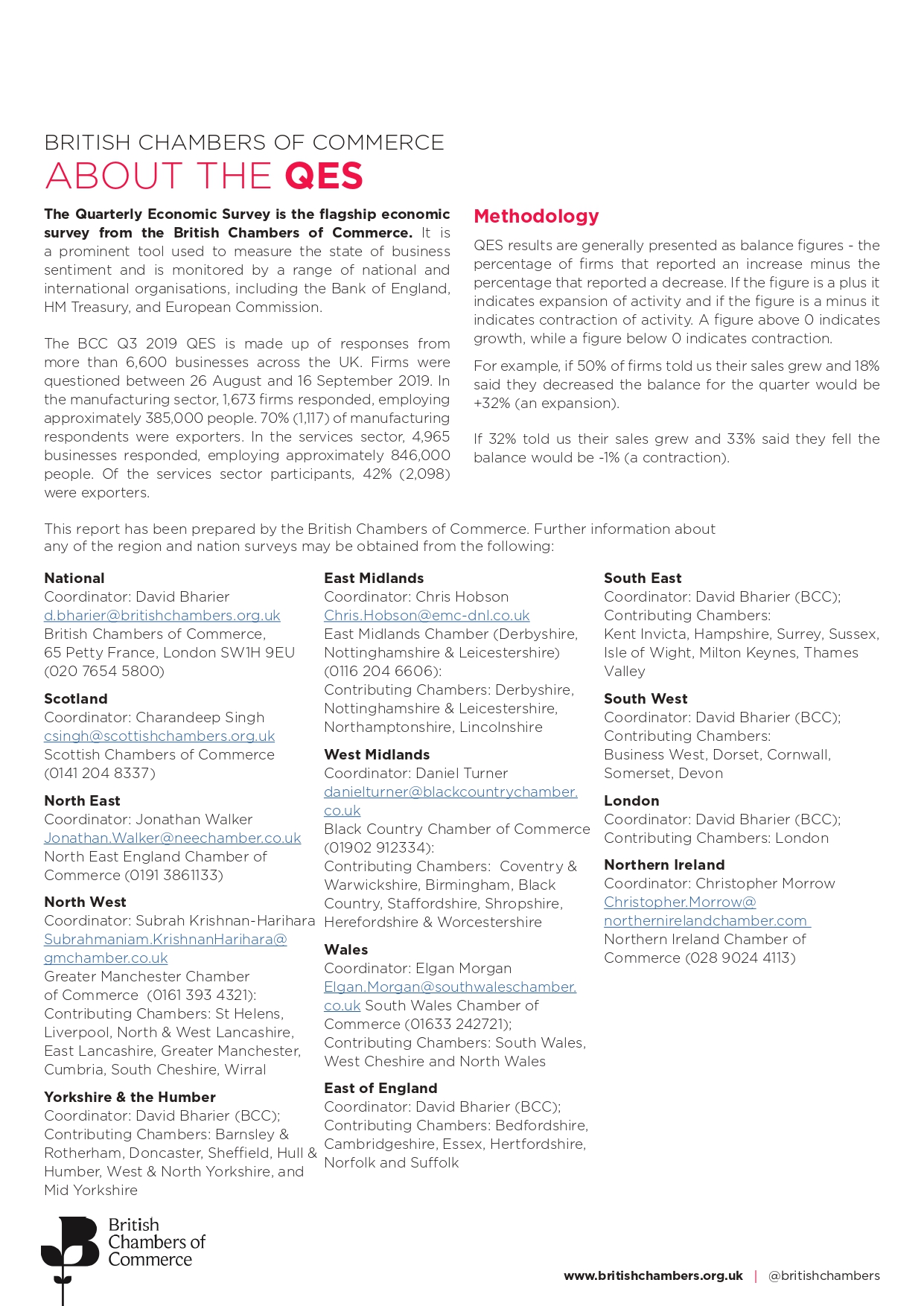